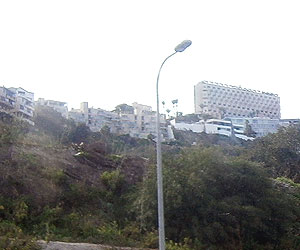 Tiberias is located on the western shore of the Kinneret.

Tiberias is one of the four "holy cities" of the Land of Israel, which includes Jerusalem, Hebron, Tiberias and Safed.

From the Talmud we learn that the forefather Jacob lived in Tiberias. Tiberias was the main spiritual center after the expulsion of Jews from Jerusalem.

The city was built in the 17th year AD and is named after the emperor Tiberius. In the 70th year, after the destruction of Jerusalem, many Jews fled here. Many yeshivas were built in the city, the Sanhedrin was sitting there. In Tiberias Mishnah was composed.

In 1564, the Portuguese Jewish philanthropist Dona Gracia rented the city from the Turkish sultan Suleiman the First and began to rebuild it.

In 1740, rabbi Chaim Abulafia settled in Tiberias. At the end of the 18th century, the chasidim of Rabbi Menachem Mendel of Vitebsk settled here.

Since the beginning of the Jewish emigration to Palestine in the late 19th - early 20th century, the population of the city has greatly increased.

Tiberias is a tourist city. On the shore of the Kinneret are luxurious hotels, from the windows of which you can see a beautiful view of the lake.

City streets and attractions near the city:

The View of Kinneret

Fishing on the Sea of Galilee

City streets and attractions near the city:

The View of Kinneret

Fishing on the Sea of Galilee

Israeli Settlements in Judea and Samaria

Religious Cities and Villages of Israel

Distances between Cities and Villages

The Health Care System in Israel

Hospitals and Medical Centers in Israel

Cities and Villages of Israel

Traveling in the Holy Land

The Antiquities of the Land of Israel